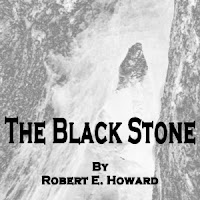 This story is one of Howard's stories that can be considered part of the Cthulhu Mythos (H.P Lovecraft's worlds).

A young man reads an ancient tome called "Nameless Cults" and discovers in it references to an artifact called "The Black Stone". Worshipped and abhorred, the stone grabs the man's attention and he delves deeply into its mysterious history, until he finds that it truely exists and so embarks on a trip to visit the stone, where he discovers the dark and horrifying truth.